Time in the studio

I think a lot about how we record and the results we get out of various approaches. When we were first beginning to work in professional studios, I found it almost impossible to think about how much time we would need, etc. If you're inexperienced, how do you estimate? I've found recording engineers to generally not be super helpful on this front. After all, there are more unknowns for them then there are for you, theoretically. As in: how well rehearsed will the band be? How's their musicianship? How strong is the singer? How good is their equipment? This all boils down to time: time for tuning/tones, time for retakes, time for editing, etc.

For my own purposes, I've been looking at what we've done on the various records and thinking about the results. I've broken it down here with the thought that perhaps this information will be useful to other bands! Let's go in chronological order:

Notes: This was the record we didn't know we were making. When we first entered Randy's studio, we were recording a few songs for a demo to book shows. When I realized what a good opportunity this was to get a full length down, though, I scrambled to get enough songs together. Net-net, we weren't super prepared. We were writing the bass line for "Triptych" during the first playback, for example. Randy was being paid through web work and a gear swap, so there was only so much of his time we could take without feeling bad about it. I had also only been singing for a few months, which didn't help. Mixing took forever because I am SLOW and not very sophisticated. Don't get me wrong - I like the record for what it is - my first foray with a pop band.

Approach: Setup was a pain and cost time because we kept doing the record in 3-4 hour spurts on weeknights. We had to tear down between each session. Drums, Bass and Guitar went down together. Bass and Guitar were DI. Guitar was replaced later by Jesse playing alone through two amplifiers. Bass was replaced in a few spots. Then we did a few guitar overdubs. Vocals were done last with many spot fixes (but no auto tune or whatnot.) This was a Pro Tools record.

Note: This was the Electrical Audio experience (or at least how I defined it to be.) That's the thing with Electrical Audio. They'll do whatever you want. So you're free to soar, or to hang yourself. :) We were very well prepared for this record with one critical miss: my aversion (at the time) to click tracks. We had rehearsed a ton and played the songs live for months, but we weren't doing anything to control tempo. The net result is a bunch of super-energetic, live-feeling takes that get a little too loose at times. But it's a great record of our live show at the time, and the songs are some of my best.

Approach: Setup time was quick and efficient because of Greg's obvious competence and the incredible equipment and rooms at EA. Drums, Bass and Guitar went down together, everything through amps, all going to two inch tape. There were very, very few punch-ins. There are literally two instrument overdubs on the entire record. One piano on "Lonely Days" and one guitar during the bridge of "Flirting WIth Disaster." Vocals were done last and at great speed (I had rehearsed a lot.) The end result is a very raw though immaculately recorded "live" album.

Note: Notice the obvious uptick in the number of hours spent per track? That's what it takes to do this shit right. Props to Steve Fisk for guiding us to a budget and timeline that led to excellent results, as efficiently as possible.

Approach: Setup was super efficient, though we made many more changes as we went than we did at EA, because we had a lot more tracking time. Drums, Bass and Guitar went down together, everything through amps. There were very, very few punch-ins on the basic tracks. However, there were lots of overdubs! Extra guitars, percussion, some piano and organ. We were extremely well-rehearsed (two practices a week for two months, lots of live shows) and Daniel was playing to a click track on all but "All Surface." We played to Daniel. We recorded straight into Pro Tools. Tempo and timing is precise throughout. In short, this record is as it was supposed to be. The only slight regret is that I was not fully prepared to track vocals. We hadn't expected to record them at Black Lodge, but we were so AHEAD of schedule due to our intense preparations that it made sense to do them there to preempt the necessity of me traveling to Seattle (which would have cost a thousand bucks and required vacation time at a new job that I didn't have.) So I did the best that I could. I sang it like I had been live. I think it worked out well. Any "blemishes" seem to add to the humanity. There's certainly no lack of feeling on this record, which in many respects is what matters most.

Note: there's some obvious inefficiency here because when you're tracking an EP you do the whole setup / drum tuning thing and only get to leverage the results for 3 songs, rather than 10 or more. So that up front overhead hits you harder. Other than that, this is the high water mark of Sexy Accident efficiency in the studio.

Approach: We hauled ass. As with Mantoloking, we were very well prepared. Lots of rehearsing with Daniel playing to a click track to control tempo. We even had the guitar tones worked out before we got to the studio, with notes of every setting for every song. All of the basics went down simultaneously to two inch tape: keys, two guitars, bass and drums. We did very few punch ins (maybe two? both on guitar), and played about three takes per tune. We kept the last take in all cases, 'cuz the feel kept getting better. I was well prepared vocally. We did two complete takes of my vocal for each song, with one or two punches. Camry sang her parts. Then we transferred from tape to Pro Tools. This took some time, but the sonic benefits of recording to tape were worth it, especially with the guitar tones. More overdubs followed. Finally, we cleaned up the tracks and sent 'em to Fisk, who did his usual mix magic.

So, what have I learned from all this? It takes about 14 hours a song to get it right, at least for us (assuming you want to do a lot of overdubs - we could probably do a near-flawless "live," EA style album in more like 5-6 hours a song, now that we know how to prepare.) I can't overstate the importance of prep if you want to track like we do - "live" as a band. And for me, that's the only way to do it. That's how you get the rock feel. The click-track hybrid (where the drummer listens, but the rest of the band doesn't), is perfect for our style of aggressive yet precise guitar pop. If I was doing something jazzier or with more loose swagger, it'd be a different story. Every once in a while, we get rid of the click for a song that really needs to ebb and flow (All Surface is such a song), but other than that, I love what happens when we control the tempo. It makes the live show better, too, even though we don't play to a click live. Since we've rehearsed that way at a consistent tempo, though, you intuitively lock into the right speed (or close to it.) This mitigates the issue of adrenaline leading to over fast performances (which can get sloppy when your parts are intricate, which ours often are.)

So yeah, those are my thoughts. I hope they were helpful and feel free to hit me with questions!


- Jesse Kates / The Sexy Accident - Download our music for FREE

Listen to our new tune!

The Sexy Accident has begun streaming the lead track off of our new EP, Now That She's Gone! You can hear it right now by clicking on the player above or, if you can't see the player, by visiting music.sexyaccident.com!

Enjoy, and please spread the word!

All three tracks from the EP will be available for download on June 1st! 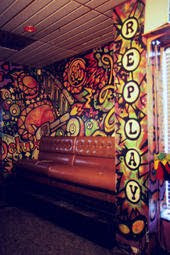 (the latest newsletter... :)
So, hey. Have you ever met a girl you like, you know... kinda feel a little bit special about? Like she makes you feel all jiggly inside? Like, she makes you want to mmm... you know. So yeah, when you made up your mind to get your move on, didjya like transform yourself into like a bull or a shower of gold or a swan or a cloud? Like Zeus? How'd that work out for you?

OK, I'm sorry for being random, but I've recently discovered the miracle of Netflix streaming on demand, and I've been watching a whole lot of movies. And 30 Rock.

But when I haven't been watching movies, I've been making records and booking shows!

First, THIS WEDNESDAY May 12, we are rocking Lawrence, KS with the both inimitable and luscious Hidden Pictures. Show's at the Replay Lounge, and will start right around 10:30 (fo realz - we honor yo bedtimez.)

The Sexy Accident will play first, followed by Hidden Pictures around 11:30. Be there!

Then, on Wednesday May 19, we will play Troubadour's Music Club at Bulldog in KC, hosted by the inimitable and luscious Kirsten Paludan! Those festivities begin around 8pm.

Our new EP, entitled Now That She's Gone will be released on June 1, digitally, and on CD at our tour kickoff / CD release show at the Record Bar on June 9!

The new record is both inimitable and luscious, and you will truly enjoy it, or I will punch your face.


"The Sexy Accident Wants To Be Your Milkman"

Now I tell you about our most affordable and awesome T-Shirt EVAR!! The new shirt features the cunning slogan above, and a strangely cute/creepy design by the inimitable and luscious Christine Schumaker (aka Chubi B.) It's also bargain-basement priced at $10 shipped.

You can buy this shirt by clicking on this underlined hypertext link!

And with that, internets, I must depart! It is time for me to go out on a date with my wife, who is both inimitable and luscious.

all quiet on the western front

Or at least that's what you'd guess, from the state of the blog. But really, we're incredibly busy!

First, we have booked almost all of the dates for our impending Unintended Acceleration Tour to NYC and back.

Second, our new EP, entitled Now That She's Gone, has been mixed and mastered and is now at the pressing plant. We'll release it on-line on Tuesday, June 1!

Third, we're already working on new songs for the next EP! (We're excited about this EP concept. Can you tell?)

So yeah, it's a busy time. There's a thunderstorm out my window and it's late, though, so I should unplug this beyotch and get to bed! Happy Spring!