We've been quiet but are busily preparing for album 7! I have a tentative title, but don't want to spill the beans because that would be messy all over your internet. 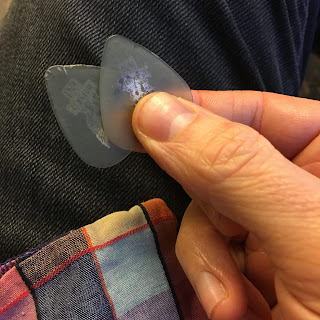 We're psyched to be working with Steve Fisk again at our longtime haunt Westend Studios. We've been debating recording formats, of which the analog varieties tend to impart a certain character on the sound. For instance, the basic tracks (drums, guitar, bass) for Lavender 3 and Ninja Ninja Fight Darth Vader were both recorded to 24-track 2" tape via an MCI machine with Dolby-SR noise reduction, which contributed a glossy sheen to those records. Champagne Babycakes was recorded to 16-track 2" on the same MCI using a different set of heads without the noise reduction, which produced a grittier, punchier tone. And both of these methods sound less "bright" and precise than digital recording, which we used for basics on Mantoloking and always use for overdubs. We're not sure yet what the right "sound" is for this session, but we've left it mostly up to Steve.

The band is currently in the thick of arranging the twelve songs for the new album. We're making all kinds of small but critical decisions about tempo, how to handle transitions, kick/drum patterns, when notes stop ringing (which is just as important as when they start!), which instruments will be tracked during basics, etc. We're bouncing between partial or complete instrumental renditions and passes with vocals to make sure everything lines up while allowing for microscopic examination. We also have to get used to playing the songs with no vocals, because like most bands, we generally don't record the vocals at the same time as the instruments.

I'm trying to resist a temptation I often face in times like these to buy 1,000,000 pieces of gear, none of which are really "necessary" in the strictest sense, but I have recently augmented my arsenal with a new partscaster equipped with super beefy flatwounds, an amazingly stable tremolo and unusual pickups, plus a new 1x12 cabinet with a one-off Celestion reconed by Ted Weber. Never forget the importance of speakers to guitar tone: it's where the sound comes from! :)

With that I will let you return to your interweb. Don't get stuck!