Here at The Sexy Accident we pride ourselves on attention to detail, so we're providing a correction and a clarification to the Champagne Babycakes game. 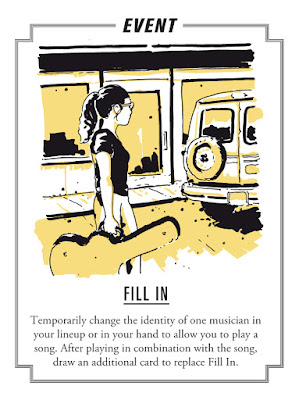 Fill In: Temporarily change the identity of one musician in your lineup to allow you to play a song. After playing in combination with the song, draw an additional card to replace Fill In.

2) In some cases, the Trump Card can lead to an unplayable scenario. For example, if you Trump Card a Craigslist but nobody has a musician to steal, what happens? The answer is nothing. The instructions should read:

Trump Card: Immediately transform an event played against you into an event you played. Draw an additional card to replace Trump Card. Play resumes as normal. If there is no target for the Trumped event, the Trumped event does nothing.

Subsequent reprints of the game will make these changes, so consider the original instructions markers of the first edition! :)