I'm taking a break on the morning of day three to write this post about day two. Right now, the upright piano at Westend is getting tuned so that Steve can lay sweet solo jams all over our musical toast.

Yesterday we finished basic tracks for seven songs! That's a Sexy Accident record. Props to the hardest working rhythm section ever to play Mariokart in a control room. 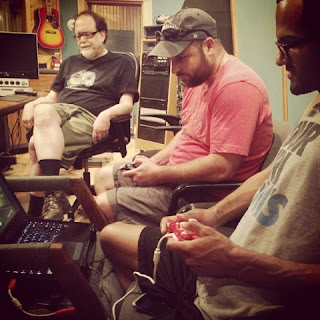 We made the mistake of starting the day with sneaky, which is one of the most intricate and energetic songs on the record. None of us had warmed up adequately and we ended up beating our heads against the wall with six takes before finally giving up and going to lunch. After completing the basics for four or five other songs, we returned to sneaky and killed it on the first take. It just goes to show that it's important to think through what you play first, second and third in the studio! But not fourth, fuck that shit.

The band enjoyed a delicious lunch at Room 39 with my friend Carly and she, Steve and I went to Anton's Taproom in the evening for dinner and drinks and we had the most delicious pesto with cranberries. Because really this is a culinary tour. Didn't you know?

Songs completed yesterday: She's The Memory You Keep, I Do Or Adieu, Sneaky, Not About Girls, I Need You To Be Real, I'm Going To Love Your New Boyfriend, Drill To The Hull

If all goes to plan, we will wrap basics this morning and begin the transfer off the MCI 16 track into ProTools.