Last week, I penned my first post of musico-literary pedagogitude - Jesse's Rules of Lyric Writing #672 - and lo, for it was dead sexy.

But to date, I have received exactly 0 submissions of songs in honor and thanks. Ya'll need to write me some tunes pronto, and not in the voice of Yoda. Get to it! I'll be over here, eating this eclair.

Only the worst pontificatory educationalists teach through negative example, so I've decided to go beyond writing a bunch of rules telling you what not to do to write awesomely uncommercial songs. No! I'm going to give you the secrets of my un-success, as well. The "to-do's," as it were. Or are they "to-not-do's for the commercially successful?" I'm really not sure, and frankly, Bobo, I don't give a damn. 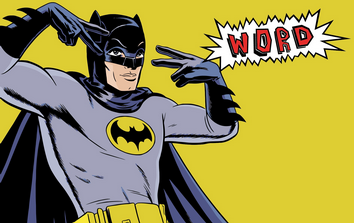 Now any of the 19,271 books on lyrics will tell you blah blah blah, you have to choose words. And they should be spelled right. And every other word should begin with the letter "B." But who's going to tell you to be weird in your word choices? Only me.

At the risk of gushily spilling my influences down the front of my sweater, I really love The Wedding Present. I love the guitars, the arrangements, and the songs. David Gedge is recognized as a brilliant songwriter, and rightly so. He wields point of view like a garden trowel via a uniquely tight, conversational style. And beyond that, he knows how to pick the right, weird word.

But Zambezi is not just a weird word. It's also the right word. The Zambezi is no crick in the wood behind Paw's. It's huge. Only Aquaman could swim it. And it's exotic - far off for most TWP listeners. So this is an absurdly ambitious goal - the kind one would shout in jest if one had just ridden a wicked water slide with one's sweetie. "Zambezi" also sounds right. It's zesty, like "Zinfandel" and ... "zesty."

And of course, Gedge cooly rhymes "Zambezi" with "easy," and lands a good number of syllables for the melody. That's how you play skee ball, folks.

As for my own work and weird, right words, I'm proud of how I sullied Chilean poet Pablo Neruda's name by repurposing it as an ambiguous euphemism in Let's Play*, a song about getting busy in a bookstore:

in the dark you're all mine
fan your pages, touch your spine

And with that, I am spent.

Have you ever picked the right, weird word?

*Let's Play appears on Lavender 3, The Sexy Accident's forthcoming fifth full-length out in 2014.

Being able to pick the right weird word has a bit to do with who is going to sing that word in a song. I expect such things from the SA. It is a BIG reason I like the band so much - great pop hooks and unusual word choice. I feel that it wouldn't work for me - I'd have to change the whole outlook and presentation of my shtick in order to start getting weird.

But that doesn't stop me with my band, which is designed to be a bit more quirky. However, weird word choices tend to be due to a need to rhyme. Thus we rhymed "wake" with the term "strakes" once. We even have a chorus that is a repeated "Wadi Taka Tayo" American Indian words, apparently (so says the early 60's campfire girls handbook).
How about his couplet we love:

Fun!
--Erik of The Wooly Vicars

Thanks for sharing, Erik! And for the kind words about our work.

As you point out, these "rules" are the things that I think about and like in lyrics, not necessarily what will work for everyone, or even most people.

I don't think I've seen "mercantile" used in a song, before. Fun!